Yesterday marked the start of 7 days off so the plan was to try and get across to West Somerset for a couple of days to activate Staple Hill, Wills Neck and the 3 summits on Exmoor staying overnight in Minehead Youth Hostel.  However, Mrs CFS had other plans, in addition to her beautification (G/SE-007 blog).  She had decided that new lounge carpet was being laid on Friday so the old ‘hard wood’ flooring had to be lifted and the lounge re-decorated!  This put pay to the 2 day exped but she was happy for me to spend Tuesday ‘on the hills’.  As the 3 on Exmoor includes Dunkery Beacon (2 pointer) that would be better done when the winter bonus is in force so it was off to Wills Neck and Staple Hill.

Decided today to have an early start and beat the traffic on the A34 and A303, so it was up at 5.30 and on the road for 6.00.  A very pleasant sunny drive down to the Quantock Hills got me to the northerly Car Park where the pre-historic Triscombe Stone can be found (ST 163359).  Set off through the gate at the eastern end of the car park and almost immediately you enter a small clearing with the main track going straight ahead and two smaller tracks heading up to the right.  Take either of those two right hand tracks, they join up later, and follow them clear of the woods and onto the side of the hill.  About half way up the hill there is a fork in the track.  Either will take you to the top however, the left hand fork will take you directly to the trig point.  The walk up is easy, distance 0.6 miles ascent 215 feet time 17 minutes. 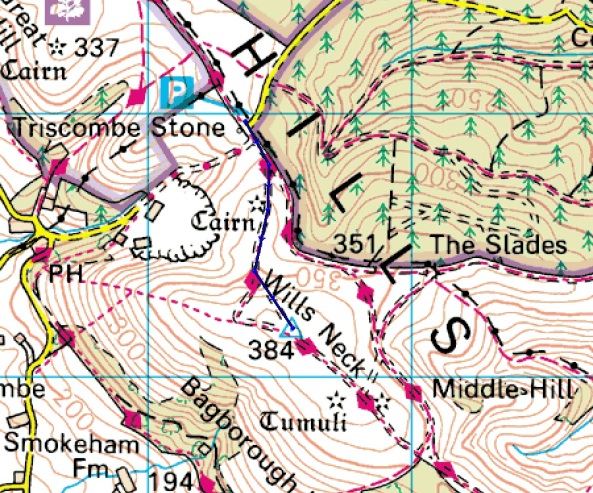 A quick call from the trig point on 145.500 netted G0VFK in Ilminster but nothing further, so a move to a suitable location close-by for HF.  I really struggled today on two counts.  Firstly the band conditions were abysmal and even the reliable 60M wasn’t playing ball today, and secondly I had left my phone at home so was unable to self spot on SSB.  That was not the only problem with leaving the phone at home.  I don’t wear a watch as I use the phone for the time and I also have the Sotawatch App to see who else is about.  So today I was activating blind in the good old fashioned SOTA way, relying on the chasers to spot me.  I managed 2 QSO’s on 60m but got no response to my calls on 7.118Mhz so a switch to 40m CW would at least get me spotted by the RBN.  This QSY brought in a small string of QSO’s including a S2S Mirko S52CU/p on S5/JA-029.  Having just finished on 40m CW I heard John G4TQE/P on Periton Hill G/SC-006 calling CQ on S20 so a quick call to him and another S2S in the log.

Sorry no photos today as I use my phone for that as well – its not until you don’t have it that you realise how much you can come to rely on the modern smartphone.

From Wills Neck to Staple Hill is about a 45 minute drive across central Somerset.  I chose to park up at the gate into the wooded plantation (ST 232163), there is room for 2 or 3 cars without impeding access through the gate.  This is an easy walk along wide, well maintained forestry tracks, distance 0.7 miles, ascent 65 feet time 15 minutes.  The only hard part of the whole walk is finding the trig point in all the undergrowth.

Having eventually located said trig I tried VHF to no avail so set up for HF. Band conditions hadn’t improved since earlier in the day and numerous calls on 60m resulted in nil response.  The same thing happened on 40m SSB – a big fat zero, not helped by the inability to self spot.  So it was off to reliable old CW and the wonderful RBN.  A steady flow of 5 QSOs appeared in the log including 2 S2S’s with Heinz HB9BCB/P on HB/BE-116 and Colin G8TMV/P on G/SC-009.  A quick switch back to 40m SSB and a check of 7.160Mhz bagged John GS0OOO/P on The Ben GM/WS-001 for the final and 5th S2S of the day.  On that happy note I packed up and made my way back to the car for a pleasant 2 hour drive home and a relatively quiet A303!

The carpet man is now coming on Thursday so I may be allowed out to play again on Friday – watch the alerts for more info.