With just a few days of my holiday left and the XYL quickly making claim to them I made the move to go walking on Sunday.  As regular readers will know, weekends are not my favourite time for walking but Sunday is the only day I can fit in before returning to work.  The weather was not looking brilliant, forecasting high winds and heavy snow – bring it on.

Today’s target was Waun Fach, the largest of the Black Mountains at the eastern end of the Brecon Beacon range.  At 811 metres this mountain is worth 8pts plus the 3pt winter bonus making it a worthwhile solo walk for a 6 hour return drive from home.  Leaving home at the customary 0430hrs I set off along the A34 & M4 for South Wales.  I arrived at a parking place near to Castell Dinas at about 0730 (SO 176303) and by 0740 was heading off down the track.  Sorry did I say track – more like a river, the stream that flows along side the track had burst its banks, so grateful for GTX boots.

This was very much a walk of two halves.  The first is the magnificent Y Grib ridge or Dragons Back, an enjoyable ridge walk talking you up to the main plateau at Pen y Manllwyrr.  The second is the atrocious bog and peat hag ridden plateau walk to the summit.  I followed the obvious route straight up the ridge of the first hill.  The walk up is deceptive, as on the surface the ridge appears to be one steady gradual ridge climb.  However, the local name ‘Dragons Back’ gives away it real profile of a series of climbs and descents getting progressively higher. Very much like a saw tooth profile.  The views during the climb were very good in all directions though the summit of Waun Fach was shrouded in cloud.  At the top of y Grib there is a substantial cairn before the ground levels off for half a mile before the final climb up to Pen y Manllwyrr. From this point the track becomes very ephemeral and you find yourself having to weave all over the place to avoid the worst of the peat hags and bogs.  There had been  quite a considerable snow fall over night which had drifted into the gaps between the hags causing some consternation as I disappeared up to mid-thigh on several occasions.  All of this contributed to slow progress for the last mile of the walk but I did eventually arrive at the top to see the summit scattered with gravel bags in preparation for the laying of tracks.  Shame they hadn’t started from Pen y Manllwyrr.  Distance 3.2 miles, Ascent 1660 feet, Time Taken 2 hours 15 minutes. 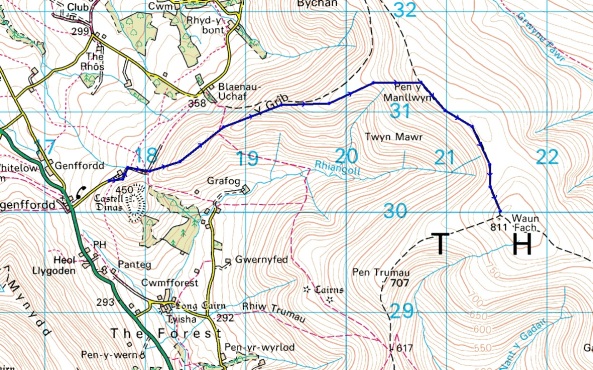 Sitting on one of the gravel bags I put out a call on 145.500 MHz and got an immediate response from Stewart G0LGS who kindly spotted my.  This was quickly followed by GW1BXX, G4WTF & GW3XJQ then silence.  I called several times but heard nothing more and as the snow was falling again and the temperature had fallen I decided to get off the hill.  Heading back I made quicker time across the plateau finding a slightly better route to take.  The only point of note on the return is that good navigation is required in order to pick up the descent point off the plateau back down to Y Grib as the track cannot be seen until you are at the very edge of the slope.  I had used my reverse track on the GPS to find the correct point to start the descent.

Bags of Gravel and hardcore scattered around the summit

The descent of Y Grib Ridge (Dragons Back)

This was a real winter activation with a reasonably high summit, snow, high winds and falling temperatures.  The ridge walk was excellent but the plateau left a lot to be desired.  The radio side was disappointing though in fairness I didn’t hang around too long and it was planned to be a VHF only activation.  Thanks to those that checked in and to Stewart for the spot, very much appreciated.

Should have entered the ‘Milk Tray Man’ competition