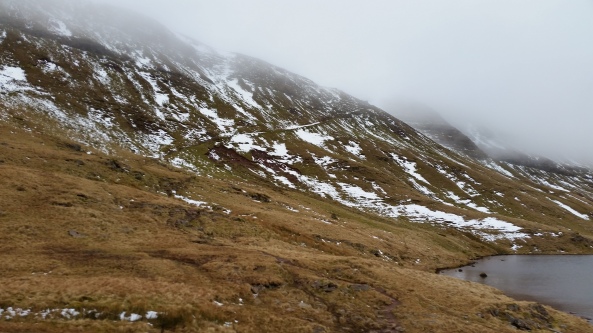 The line of the footpath can clearly be seen

Had hoped to have done this summit before the 15 Mar but there was only so many days I could get away and it wasn’t to be.  Having started to plan several mini expeditions for the forthcoming spring season I realised that most would require a lot more daylight to complete than was currently available.  As a result I decided to complete the GW/SW 8 pointers by taking on Fan Brycheiniog in the western Black Mountain region of the Brecon Beacon’s.  Parking at SN 853217 where there is room for about 3 cars.  There are other suitable parking places very close by.

Setting off at 0830 I followed the very ephemeral footpath that likes playing hid and seek all the way up (now you see me, now you don’t!).  Initially I headed towards the derelict sheep pens following the up the left side of the juvenile River Tawe.  Crossing the river via well placed stones I made a beeline for the main summit cliff which was barely visible due to low cloud.  In just over an hour I arrived at the lake side and had a brief chat with a guy who had camped out overnight.  He advised me that the path to the summit was very icy in places and the large patches of snow had started to turn to ice. 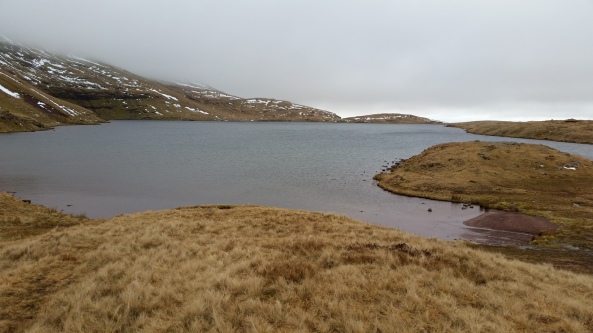 Heading off up the obvious footpath that runs diagonally up the side of the cliff I soon encountered the ice.  The way ahead was treacherous but with care the ascent was made onto a very windy and cloudy summit plateau with visibility about 20m.  The track headed off up slope to the right until the stone shelter then the trig point slowly appeared out of the mist.  The path to the summit was also very icy and to the side was a good 2 feet of iced snow, all of this with a gusting wind trying to blow me towards the drop back down to the lake.  Distance 2 miles, ascent 1230 feet, time taken 1 hour 40 minutes.

After the duty photo call I hunkered down inside the stone shelter but this didn’t provide much protection from the cold and even with thermal gloves on I lost the feeling in the ends of my fingers with 15 minutes, even the hot coffee didn’t help.  The decision was made to see what happened on 2-fm and leave the HF till I come back on a summers day.  A selfspot for S20 quickly brought MW0PJJ into the log followed by Don G0RQL.  Over the next 12 minutes 5 further stations made their way into the log before 2m went very quiet.  Apart from my fingers I also noted that my left GTX boot leaked!! so after sitting in the shelter for about half an hour my left big toe had frozen and had no feeling either.  Enough was enough and I quickly packed up and very carefully headed off the summit.

Once the very careful descent of the cliff path was negotiated I had warmth and circulation flowing again to my fingers and toe and spent a pleasant 5 minutes talking with a D of E assessor who was out with a group of teenagers.  He was keen to know the state of the path and the summit plateau and following our chat decided to re-route the group elsewhere.  The rest of the descent was uneventful and was most grateful for more hot coffee once back at the car.  Having changed into dry warm clothes I noticed that after several hours of the summit being shrouded in cloud, the summit suddenly cleared and I was finally able to get a photo of the whole hill.

It always happens to me – I get back to the car and the cloud finally lifts!